Giant Ants Will Mug You For Sugar 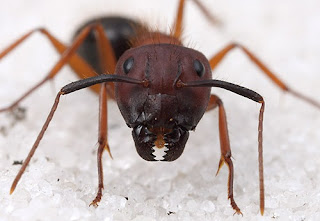 Biologist Alex Wild (good name!) takes macro shots of ants and bugs. Then he posts them on his awesome blog, where he also talks about what species they are and what they do and why they are interesting. He has quizzes like "Whose larvae is this?"

This is one of those things that I always think is going to be really boring, and then I am FASCINATED. Like when Paul turns on the Discovery Channel I'm like "UUUUUGH I DON'T WANT TO LEARN ABOUT SPORES" but then it turns out whoops, I really do want to learn about spores so much, and I cannot turn away, and I get mad if he tries to change it, like "DON'T YOU CARE ABOUT SCIENCE?"

Anyway, this is one of those things. Nature is cool! Look at the jaws on that one guy. Alex also talks about what kind of lenses he uses to achieve these images, if you want to know his secrets. 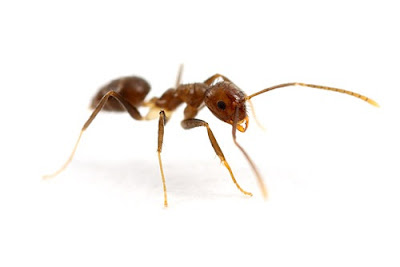 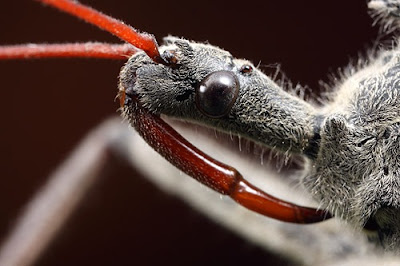 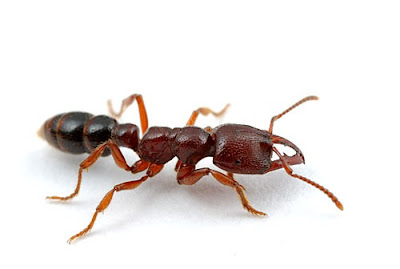 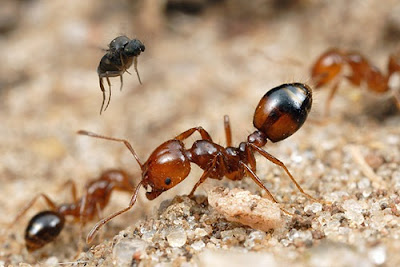 Myrmecos Blog
Via Boingboing
Posted by Cristina Markarian at 2:05 PM No comments:

Instructor and photographer extraordinaire Eleonora Ghioldi (who will be leading an Experiemental Darkroom class in the spring) was featured on Photo District News' Photo of the Day.

Visit the site to see her image, titled Andrea.
Posted by Cristina Markarian at 2:02 PM No comments:

My Dream/Nightmare Becomes a Reality

When Paul and I were in the Louvre this summer, we walked around and looked at literally 45 million paintings. At one point we stopped in front of a particularly arresting Van Gogh self portrait. The daubs and strokes of color were so vivid that they seemed almost alive. I remember standing in front of it, and thinking "I could punch this painting right in the face."

Everyone has this inappropriate museum thought, right? I mean, the guards are there and stuff, but they could never reach you in time. There is nothing but three feet of air between you and an irreplaceable masterpiece. If I punched Van Gogh in the face, I would be, in some sense, destroying history. I mean, I know they have restorers and stuff, but if I put my fist through the canvass, could it really be repaired to any satisfaction? Could I put my fist through the canvass?

I ruminated on this philosophical conundrum as we wandered the museum. In fact, here is a picture of me in front of some Vermeers. 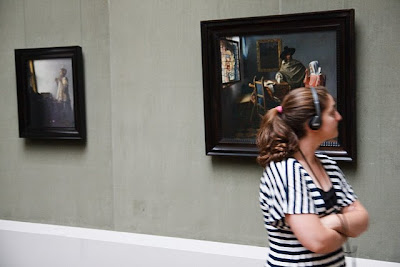 Can you tell that I am thinking about punching the Vermeers? Because I am. It's not that I wish the paintings any harm - I like the paintings. I'm just obsessed with imagining what would go down in the aftermath. At one point, Paul and I had this conversation:

Me: What would happen if I punched a painting?
Paul: You would go to jail.
Me: No I wouldn't! They can't put you in jail for hurting art, can they? Wouldn't they just sue me for like, a trillion dollars? Also, how could they prove that I did it on purpose?
Paul: You. Would. Go. To. Jail.
Me: Also, what would happen immediately after? Would a guard tackle me? Would the police come? Would people point at me and yell? Would the American Embassy get involved?
Paul: You would go to French jail, and I would not bail you out.

Suffice it to say, we got out of there without major incident. However, this was not the case on Friday when a woman at the Met tripped and FELL INTO A PICASSO!

Let's go to the paper of record for the gory details, shall we:

"On Friday afternoon a woman taking an adult education class at the Metropolitan Museum of Art accidentally lost her balance and fell into “The Actor,” a rare Rose Period Picasso, tearing the canvas about six inches along its lower right-hand corner."

Here is the painting, pre-impact:


As Tracy Jordan would say, "This is happening, people!" Granted, it seems that this was a legitimate accident, but OMG SHE RIPPED A PICASSO! However, the aftermath was somewhat anticlimactic:

"Immediately after the accident the painting was taken to the Met’s conservation studio so experts could assess the damage, museum officials said. A statement released by the Met on Sunday afternoon said, “The damage did not occur in the focal point of the composition and the curatorial and conservation staffs fully expect that the repair —which will take place in the coming weeks — will be unobtrusive.”

They can fix it? BORING! Apprently no one went to Art Jail (see, Paul!), and this story will fade from the headlines (unless this lady goes on the news, or Oprah, or gets a hidden-camera type reality show where she goes to museums and pretends to trip in front of famous works of art). But for one brief, shining moment, what had only been a morbid obsession became a reality, and I needed to blog about it, because that is why I have a blog.

Also, the comments on the NYT story are AWESOME, and include the following:

"It's natural to fall occasionally... didn't this happen also to Eve?
Perhaps she's a symbol for what is now happening to Western Civilization...."

"She really fell for that Picasso."

'"The Actor" will be in my thoughts as I pray for its speedy recovery."

"It's about time a woman got the better of Picasso."

Via Gawker and NYT
Posted by Cristina Markarian at 9:11 AM 1 comment: 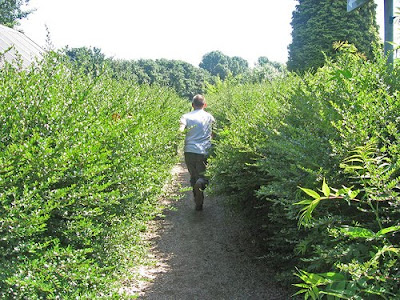 The author's explanation is equally simple:

"I put the self-timer on 2 seconds, push the button and try to get as far from the camera as I can."

As one annonymous commentor put it: "2 seconds is not very long!" Our photographer is clearly giving it all he's got, running-wise. Every shot is like a movie still, with implied motion and continuity. I also like that you never see his face. Mystery!

Also, dude gets around. 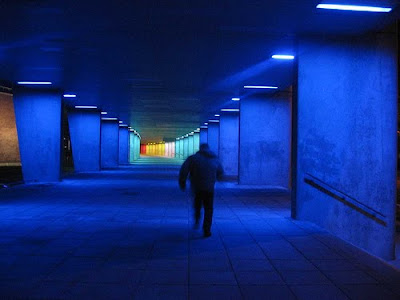 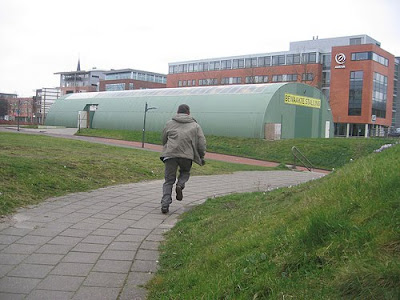 Running from Camera
Posted by Cristina Markarian at 9:25 AM No comments:

First of all, this: 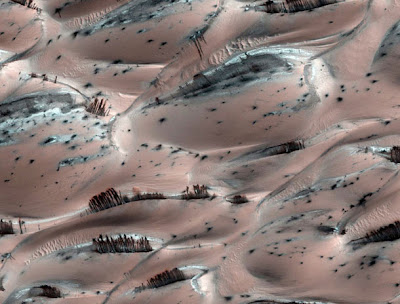 That's MARS, yo! The PLANET. That is a picture of the PLANET MARS, taken by what I can only assume is a telescope the size of a yacht (actually, it's the High Resolution Imaging Science Experiment, or HiRISE, on the Mars Reconnaissance Orbiter). What exactly are we looking at here, besides Mars? Please visit the blog Bad Astronomy to get some answers, including one to my first question, which was "What are those weird tendril thingies" and OMG ARE THEY THE BONES OF DEAD MARTIANS?

"In the Martian winter, carbon dioxide freezes out of the air. In the summer, that CO2 sublimates; that is, turns directly from a solid to a gas. When that happens the sand gets disturbed, and falls down the slopes in little channels, which spreads out when it hits the bottom. This disturbs the red dust, too, which flows with the sand. When it’s all done, you get those feathery tendrils."

Who knew all this stuff was happening on Mars? They have little Mars dust avalanches!

Do you want to see even more ridiculous pictures of Mars OH YOU DO OK HERE:

(bummer alert, the site says they are in "false color" which I think means "Photoshopped") 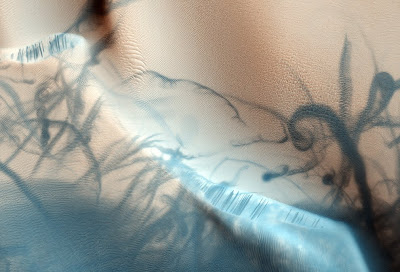 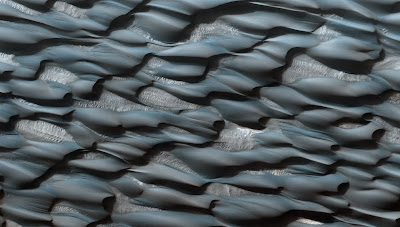 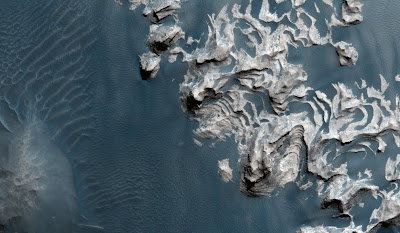 Mars, people! Get used to it! I'm glad we'll have somewhere to go in our space arks after 2012.

Also the commentors on this post have somehow managed to get into a vicious debate about religion, science, and the existence of God, so feel free to delve into that if you wish. Mars is so controversial!
Posted by Cristina Markarian at 1:29 PM No comments: 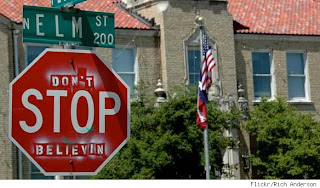 Arts Blog does not condone defacing city property, and graffiti is a crime. That said, how funny are these altered stop signs? So funny. Sometimes a little break from the ordinary brightens your day. Also, now Journey is playing in my head. 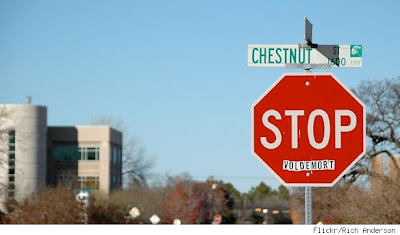 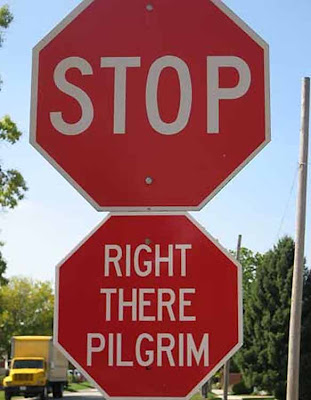 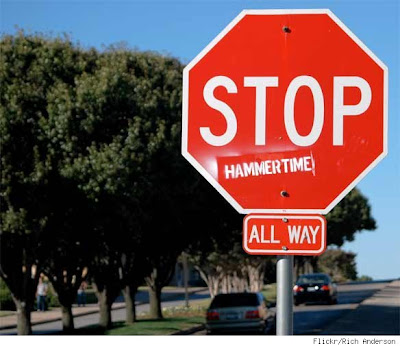 Don't Let It Go To Your Letterhead

We're back! Hope everyone enjoyed the break. I would be remiss if I did not mention that there are still art classes available! Check 'em out!

And now, on to the arty. A lot of arty things happened while I was away! Here is one that I like a lot.

Letterheady is a blog that showcases unusual and excellent letterhead. Thought letterhead had to be boring? Think again, chump! Also, the blog defines "letterheady" as as adjective meaning "overcome by a strong emotion due to a letterhead design." I bet that happens to Scott all the time. 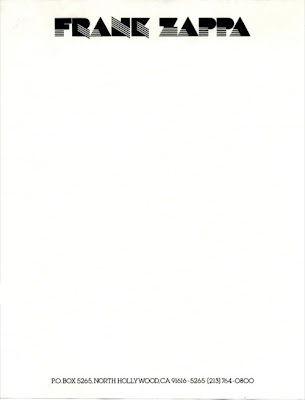 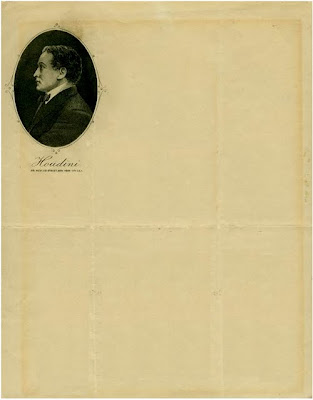 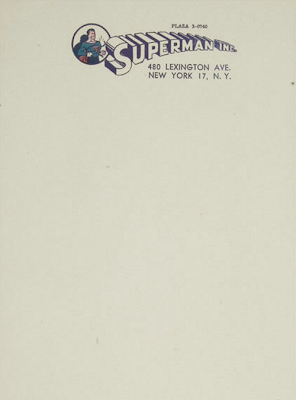 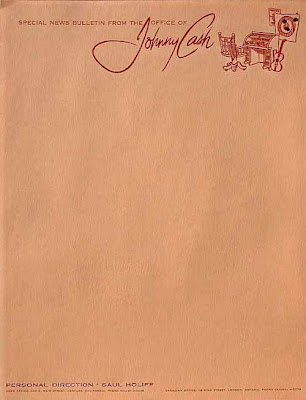 Via Laughingsquid
Posted by Cristina Markarian at 9:19 AM No comments: