"Lately I’ve been working a lot with icons. Trying to capture the essence of an object or idea with only a few lines and at the same time maintaining its elegance is pretty much design in a nutshell. That’s what so great about icons, they’re tiny poems. I decided it would be a fun project to attempt to sum up some of my favorite books, movies, historical events, anything, with just four icons; the meat and potatoes."

Obviously I like 2001: A Space Odyssey the best, but they are all fun. I also like how the Great Gatsby car obviously just ran someone down.

Via Laughingsquid.
Posted by Cristina Markarian at 8:41 AM No comments: 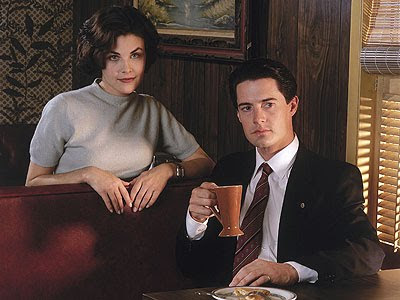 Twin Peaks fans living in Los Angeles (in my opinion, the most Lynchian place to live) should mosey on over to In the Trees: Twin Peaks 20th Anniversary Art Exhibition at Clifton's Brookdale.

The web page is fantastic in and of itself, and the show will feature work by Tim Biskup, Chris Mars, Stella Im Hultberg, Glenn Barr, Ryan Heshka, and Jessica Joslin (pieces are inspired by David Lynch's classic show).

Via Boingboing
Posted by Cristina Markarian at 9:29 AM No comments:

The Alphabet from n9ve on Vimeo.

I like this video "The Alphabet," with each letter morphing into a representation of a different font.

Helvetica has a little crown. King of fonts!
Via Laughingsquid.
Posted by Cristina Markarian at 10:03 AM No comments: