We plan classes from time to time at UCLA Extension - looking at mural art around Los Angeles. While we know that murals and street art can be fleeting, this project bring this to an entirely new level, I'm not sure what to call it - performance art - installation art, video art that happens to use street muraling as a base?
http://www.blublu.org/sito/video/muto.htm
Posted by Scott Hutchinson at 11:02 AM No comments:

We have a show coming up for students and instructors. We usually do an instructor show (in photography), and a Student Show (in Design Communication Arts) This is the first I know of where our unit is commingling students and instructors from Design, Photography, and Studio Arts. Should be fun, I'm very curious to see which areas step up and which ones shy away from public displays.
Content took a back seat when I designed this postcard, as I felt I should put student and instructor art in the two art frames on the 'wall', but played with box blends (no images) using InDesign and liked the Rothko like painterly effect so much, I left it and decorated instead of designed. (Something I always speak against.)
Read the brief on submission guidelines
Submission Deadline: Monday, June 9
Opening Reception: Friday, June 20, 6:30-9:30p
Location: The Gallery
1010 Westwood Boulevard
Los Angeles, CA 90024
Posted by Scott Hutchinson at 10:58 AM No comments:

I know this is old news, but I'm still stuck on the record-breaking sale of the Lucian Freud painting at Christie's a few weeks ago. Sold for $33.6 million, the painting Benefits Supervisor Sleeping set a new record price for a piece sold by a living artist. 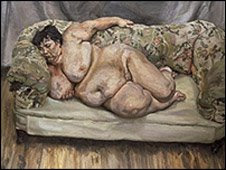 Here's the painting. I really like it, but at this point, I wonder if aesthetics even enter into it. Roman Abramovich, a Russian billion, was revealed as the buyer of the Freud painting, as well as artist Francis Bacon's Triptych as part of the same lot. Mr. Abromovich, who also owns the Chelsea English football league, has a fortune valued at $25 billion. Does he like the painting, or is it a savvy investment decision? Maybe both?

The mental image that this story leaves me with is that of a staff member carefully, carefully hanging the painting up in this guy's house (though I have no idea if he even plans to have it in his home). What would it be like to personally own such a work? To look at it at you're eating cereal in the morning? The commodification of fine art always seemed like a little bit of a contradiction to me. Artists have to eat, and there's no reason why they shouldn't be able to make millions off their work as well, but I just think I'm a little bit in the Indiana Jones camp, and that "it belongs in a museum!" I like the idea that great works are available to the public to be studied and enjoyed. Can you put price on beauty, historical significance, and cultural relevance? I guess so.
Posted by Cristina Markarian at 10:05 AM No comments: