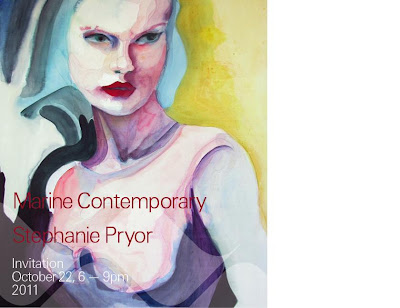 Instructor Stephanie Pryor has a show coming up at Marine Contemporary - details below!

Marine Contemporary is pleased to present Domina, Stephanie Pryor’s first solo exhibition with the gallery. For this new body of work, Pryor has been looking at old master paintings, particularly 16th Century Venetian paintings. Pryor’s most recent portraits of women are inspired by paintings of courtesans from this period, such as Giorgione’s Portrait of a Courtesan. The title of the show comes from the Latin phrase "Domina Domina", which translates as mistress, dame, lady or she who rules. In old English Law, it was a title formerly given to noble ladies who owned estates on their own, separate from men. This Latin root went on to form the words dominate and dominatrix.

Stephanie Pryor’s seductive paintings blur the line between abstraction and representation, both physically and psychologically. Whether the final image stems from source material such as nature, fashion, self-portraiture or photography, Pryor is interested in the unfolding of an expression or moment in time. One that is subject to change during the duration of painting. Pryor paints like a watercolorist, using layered thin washes of watery acrylic in brooding and vivid colors. The final piece is the result of an intuitive process of layering color to define image and to form new shapes and areas that aren’t apparent in the original drawing, but come across during a more meditative period of observation. As a result, these gestural acrylics are concurrently impulsive and considered, possessing a savage, dark and poetic beauty.

Domina is featured in the September issue of Modern Painters as one of the top 100 fall shows to see internationally.
Posted by Cristina Markarian at 9:42 AM No comments: 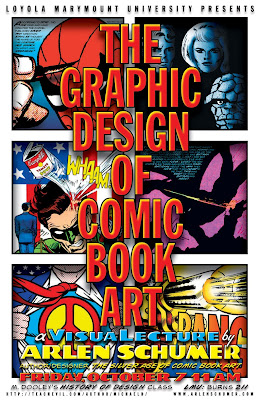 Come see award winning comic book-style illustrator Arlen Schumer present an overview and retrospective of his works. Throughout his extensive, prolific career Arlen has been bridging the gap between two verbal/visual artistic disciplines: comic book art and graphic design. Comic Book Artist magazine named Arlen, "one of the more articulate and enthusiastic advocates of comic book art in America." Based in New York, he lectures at universities and cultural institutions across the country.

Admission is free.
Parking is free.

Arlen Schumer is one of the foremost historians of comic book art, from his landmark special issue of Print magazine devoted to comics in 1988 to his forthcoming presentation at the New York Comic Con, "The Auteur Theory of Comics." His coffee table art book, "The Silver Age of Comic Book Art" won the Independent Publishers Award for Best Popular Culture Book of the year. His other books include "Visions of the Twilight Zone" and "The Neal Adams Sketchbook."

Stop at the guard's kiosk at the Main Gate (Lincoln Blvd. and LMU Drive) to obtain a permit and directions. The visitor parking lot (Hannon Field, parking lot A) is just south of the Burns Fine Arts Center.
Posted by Cristina Markarian at 9:06 AM No comments: