Go with the Flowchart

What is it about flowcharts that I find so amusing? They are so factual and grey and math-based. But combine them with pop culture, and the uncanny melding of stoicism and irreverence makes for great fun. It's like if your grumpy, musty old calculus teacher suddenly busted into the humpty dance.

Take this flowchart for the song "Hey Jude". "Hey Jude" is a great song. No one is disputing that. But break it down into its composite elements, and you get this adorable map of the lines, chorus, and of course the final, joyous Na na na NA NA NA NA. Look how fun (and surprisingly repetitive) "Hey Jude" is now! It's like a subway map, where you could catch the train at Don't and ride it all the way to Better Better Better Better WAAA. 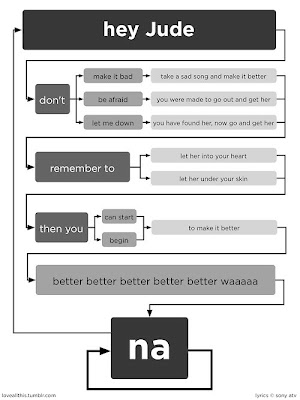 I think this next one is less technically sucessful (as a flowchart) but more enjoyable (as an awesome song). It's "Total Eclipse of the Heart" - the flowchart. 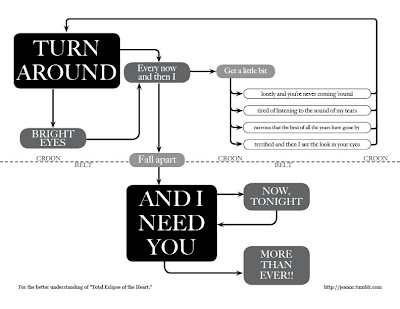 Here is my question: where is "And if you'll only hold me tight/we'll be holding on forever"??? I realize that the whole, 6.5 minute song is not represented here, but those are vital, soaring lines.

A while ago I had a conversation with my boyfriend where he told me that the same guy who wrote "Total Eclipse of the Heart" wrote most of the songs on Meatloaf's Bat out of Hell, including a personal favorite, "I Would Do Anything for Love." I was like "Get out of town," but then I thought, wait a minute, they are actually really similar! They start of all quiet and melodic, and then in the middle they each rachet up a key and become all belty and powerful (think about "And I need you now tonight/and I need you more than ever!" vs. "I would do anything for love/anything you've been dreaming of." )

If you take away only one thing from this blog post, I guess it should be that I enjoy the work of Jim Steinman.

Via Laughingsquid
Posted by Cristina Markarian at 10:25 AM 3 comments:

Gizmodo has an interesting post about Norman Rockwell, the "original king of Photoshop."

"Wait just a minute" you may be thinking to yourself. "I'm pretty sure Photoshop was not around during America's golden 40s and 50s."

You would be right, but as the new book Norman Rockwell: Behind the Camera illustrates, Rockwell set up carefully posed and art-directed photo shoots, which he later referenced as he created his paintings. Taking a face here and a gesture there, he combined subjects into whole scenes, none of which existed in the original photos. 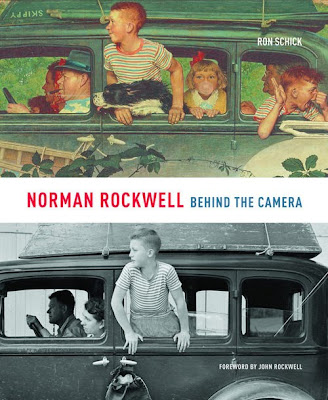 Posted by Cristina Markarian at 4:30 PM No comments:

Oyster.com is a website that publishes hotel reviews for popular travel destinations. Apparently they have a team of people who run around to these hotels and stay in the rooms and eat the room service and go in the pools and take pictures of everything so that you can see what it's actually like to be there. First of all, sign me up for that job, etc. Secondly, I feel like Oyster.com is a terrible name. I had spent probably 15 minutes on the website before I realized oh, they mean "The World is Your Oyster." I'm sorry, but it just makes me think of slimy mollusks.

But anyway, they have this great feature called Photo Fakeouts. They take promotional images of hotel pools, rooms and beaches, and run them alongside pictures that their staff actually took when they visited the hotel.

I think this is just a stunning example of how staging and some Photoshop can make an average picture look completely different and enticing. The fakeouts are not egregious, but something like changing the color and light quality of the sky, showing an uncharacteristically empty beach, or pulling the old "pool trick" create images that are not representative of the experience you will have when you visit.

Here are some of my favorites: 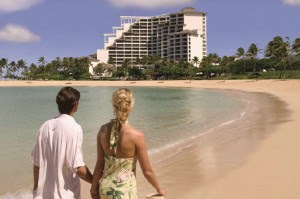 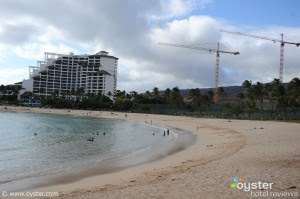 Oops! Instead of your girlfriend's french braid, the beach has gigantic cranes. And it's dark. And there are other people on it. 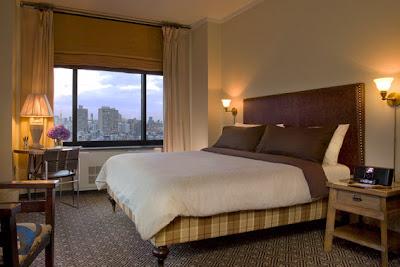 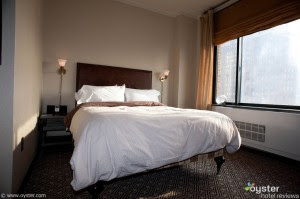 I would not expect a hotel room to look exactly like, or ever particularly like, the picture in a brochure, but this is barely recognizable as the same place. 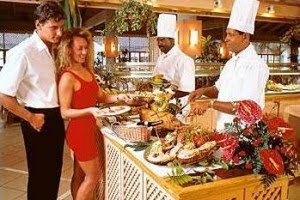 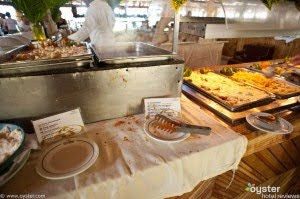 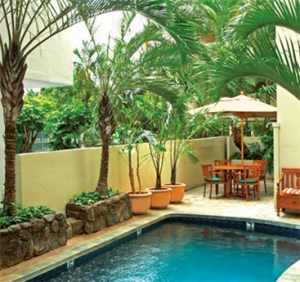 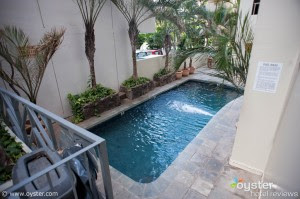 Poor little pool! Can you imagine if you were this pool posing for your big photo shoot, and you're so excited, and then finally the pictures are released, and you're like "This doesn't look like me at all!" Then you would burst into tears, but no one would know, because you are a pool.

Via Lifehacker
Posted by Cristina Markarian at 3:04 PM No comments:

Travel Photography on the Cheap

The NY Times has an interview with travel photographer Robert Caplin that is full of interesting tips about equipment, saving money, and the controversial topic of iPhone photos. He addresses many of the questions that I often get from students, so I included a few below:

A: If I was in a pinch, they make these new point-and-shoots, the Canon G9, G10, G11 series. I’ve never owned them, but I’ve heard only raves about them. I’d try to get the point-and-shoot with the most manual control possible that gave me the most ability to decide how I want to make the image. And if I’m looking to save a buck, I always look on craigslist because it’s not a bidding system.

Q: Photoshop costs $699. Is there a cheaper version?

A: If you’re really going to get into travel photography, getting a professional program is key. There is a more consumer version of Photoshop — Photoshop Elements (about $80). It’s a very dumbed-down version, but it’ll get you the basics that you need for photo editing. 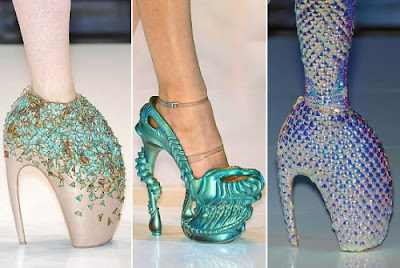 Listen, I am no shoe novice. I love shoes. I have worn a crazy shoe in my day. Heels and platforms and zippers do not shock me. Sometimes I go into Nordstrom just to touch the designer brands.

But people, the shoes featured in the Alexander McQueen show for Fashion Week were crazy. No - they were criz-azy.

First of all, let's all say a silent prayer for the models who had to sashay around the runway in what are basically enormous bedazzled hooves. This girl is like "Focusfocusfocusfocus" 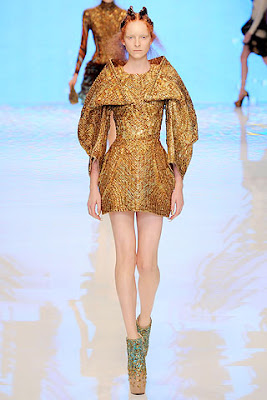 Second of all, I LOVE THEM.

Well, specifically, I love the hoof-looking ones. I think the shape is so artistic and elegant and cartoonish. They look like something a very posh lady alien on Dr. Who would wear. When you're wearing heels, your feet already don't really look like feet anymore, so why not go one step further and make your feet look like you live on the forest-planet Petalunia, and are going to a ball to dance with a dashing lobster-prince? 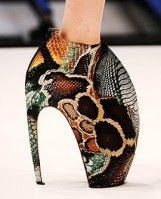 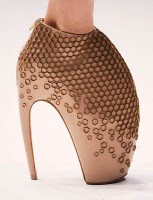 I'm not so crazy about the ones that look like pastel coral, but they get points for pure spectacle. And then there's the "Old West robot lady gunslinger" model, which one blogger called "the most wearable of the collection" and I was like "Ha, awesome." 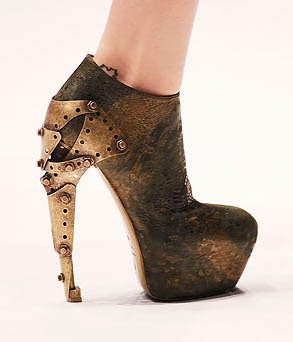 The moral of this post is that I think these shoes are avant garde and artistic and silly and fun. Purse Blog has a great feature that shows many of the shoes in great detail, so check them out! Finally, here is a picture of Alexander McQueen being like "Yeah, I did this. YOU'RE WELCOME." 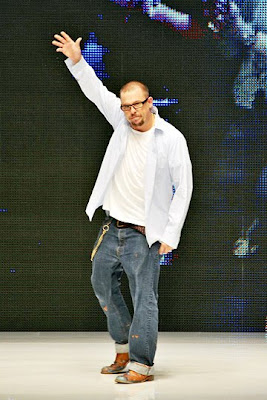 Posted by Cristina Markarian at 10:36 AM No comments:

This is kind of meta, but I found Faces in Places on Blogger's Blogs of Note. Yes, I read the Blogger blog. Bloggy blog blog blog blog.

Anyway, it's a simple conceit, but aren't so many of the best things in life? It's been around since 2007, so there are plenty of faces to look at. Here are some of my favorites: 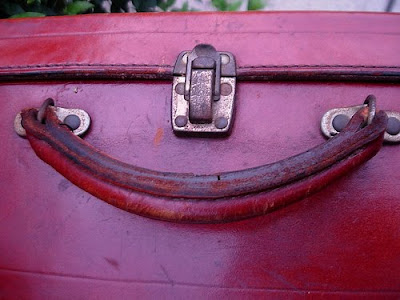 This suitcase is happy bordering on smug, but I like the bright red lipstick. I image a high-pitched, crazy-girl laugh coming out if you open it. 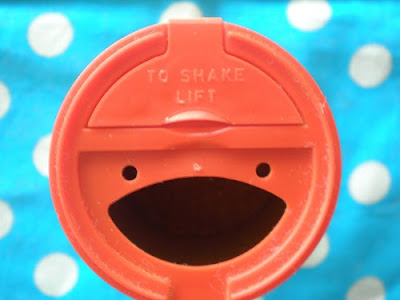 HELLO I AM A SALT SHAKER! WHEEEEEEEEE! 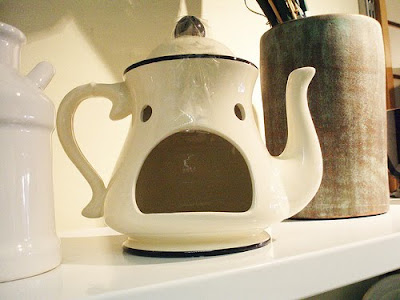 Nooooooooooo! Please don't put tea in me! Whaaaaaaaaa! Actually, could you even put tea in this? It looks like it would all come of the huge hole in the side. I don't understand. 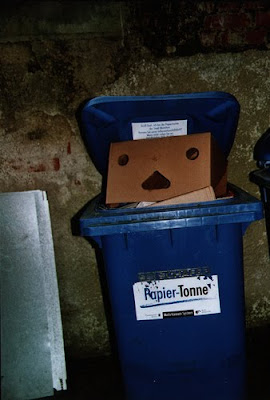 This little guy breaks my heart. He's like "Am I...in the trash? Why am I in the big blue bin? Wasn't I a good box?" He is Boxo, the star of the next Pixar movie.

Faces in Places
Pareidolia on Wikipedia
Posted by Cristina Markarian at 10:40 AM No comments: 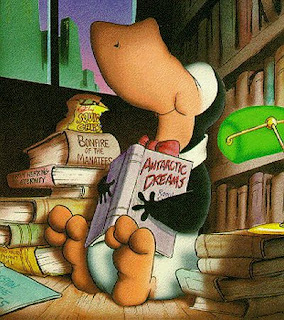 The LA Times has an interesting article about Berkeley Breathed, creator of the beloved comic strip Bloom County. He talks about how young he was when he started writing Bloom County, and how he regrets the way he handled relationships with his fellow writers, including Gary Trudeau, Charles Schultz and Bill Watterson (who is like the J.D. Salinger of comics). He is pretty self-deprecating (he calls his first strips in college “embarrassing, offensive and juvenile”), but it's an interesting read. My favorite thing was learning that his home studio is modeled after the interior of the Nautilus, the submarine from 20,000 Leagues Under the Sea.

Reading the article reminded me of how much I love Bloom County. My sister and I read every book when we were kids. We had Opus T-shirts. I also read some Doonesbury, but Bloom County appealed to me more at the time, because there was less talk about health care, and more puking and violence. I didn't understand half the references to Tammy Faye and Oral Roberts and Michael Dukakis (80s!) but it was still funny. I loved Milo and Binkley and Opus and Cutter John and Steve Dallas. It's just one of those things from childhood that, when you find out someone else was into it, you squeal and share memories.

Lately Breathed has written a number of popular children's books, which I hope are bringing joy to a whole new generation of readers, but I will always remember the good times, like when aliens reversed Steve Dallas' brain and he got a perm, or when Bill the Cat joined a cult, or when Opus was dating Lola Granola, and then they almost got married, but he accidentally punched her in the face with his nose when they kissed, and passed out instead. THAT IS ART, PEOPLE! 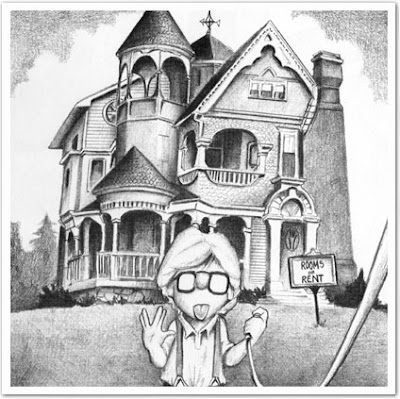