Attack of the $30-Million Production Deal 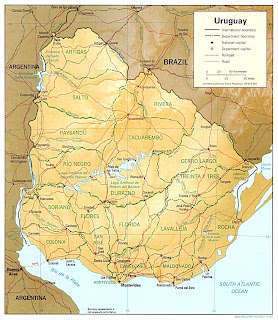 My Mom grew up in Uruguay, so whenever any of us see Uruguay mentioned in the news, we get all excited and e-mail each other, because it doesn't happen that often, because IT'S URUGUAY.

This morning Paul saw a piece in the LA Times about young Uruguayan filmmaker Federico "Fede" Alvarez. Alvarez, who runs a post-production effects house, created a 5-minute short film called "Ataque de Pánico!" (Panic Attack, for those of you who took French in High School) that caught the attention of Hollywood mainly through YouTube and word of mouth. Alvarez got on an airplane, made the EXTREMELY LONG flight to LA, and a few days later he had a $30-million deal with Mandate pictures to make a feature.

This story has so many great elements, but my favorites are the description by the Times that the short film "depicts an invasion of Montevideo by a battalion of giant robots" and the fact that it first gained attention on KANYE WEST'S BLOG (where it was no doubt discussed in all caps). Montevideo is the capital city of Uruguay, and giant robots invading it would be like an alien invasion happening in...Barstow. Or like...Fresno. NOT THAT THERE'S ANYTHING WRONG WITH THOSE PLACES! I'm just saying.

So bravo Fede, bravo Uruguay, and bravo Mandate pictures for taking a chance on what they think will be the Next Big Thing. Maybe soon we can all go to the multiplex to see Mate flying everywhere as Uruguayans battle aliens (Uruguay inside-joke!)

Here's the short film that started it all.

UPDATE: My Mom's reaction to the video: "It was panic inducing indeed, since every single scene took place in locations that are quintessential Montevideo, and part of my very consciousness. The little boy looks like an angel, typical Uruguayan look. Apparently the love for whole cities being blown up by invading aliens crosses cultural borders. Can't wait for the upcoming project!"

LA Times - Hollywood Has a 'Panic Attack!'
Posted by Cristina Markarian at 10:25 AM

this movie is just like, 3 minutes of things blowing up? are they impressed by the special effects? I dont get it.

my favorite part of this whole story is mom's reaction to it.